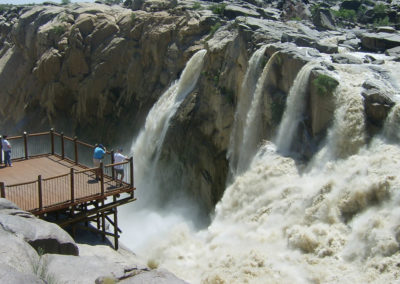 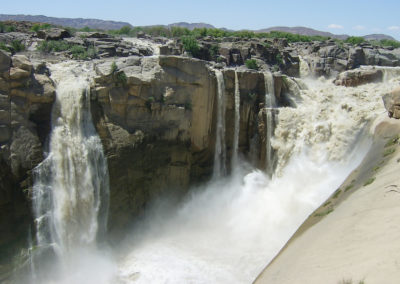 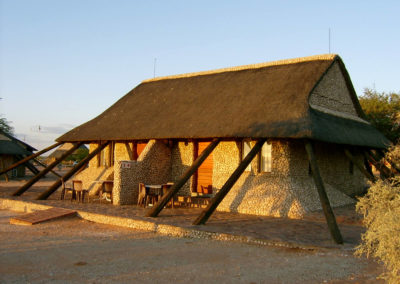 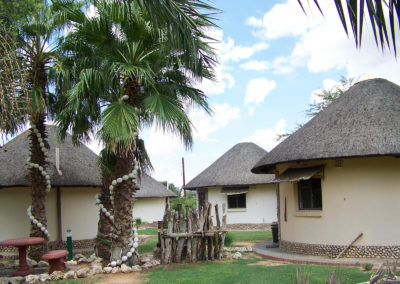 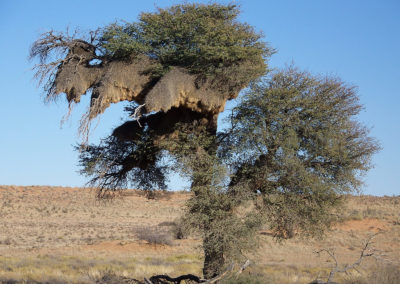 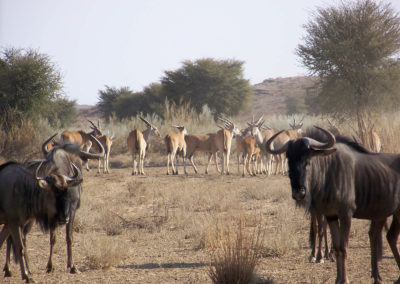 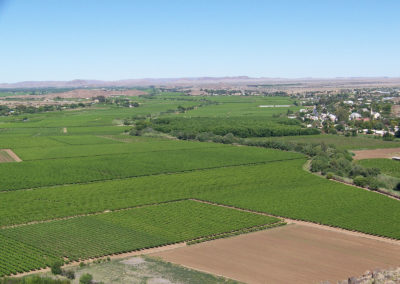 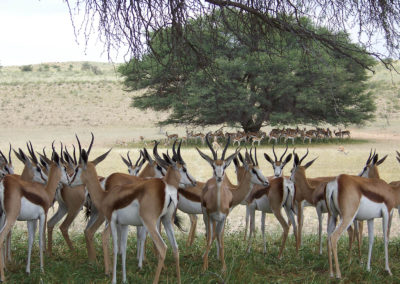 This tour is a combination of two different Desert Biomes; The Kgalagadi Transfrontier Park in the Arid Savanah Biome and Augrabies Falls National Park in the Nama Karoo Biome. Kgalagadi is a great wildlife and scenic park with species adapted to survive in this tough environment. Except for the Augrabies Falls, Augrabies Park is a scenic park with impressive rocky desert landscapes and the opportunity to see wildlife too.

DAY 02 Kgalagadi Trans Frontier Park
Morning and afternoon game drives. The route will be determined by reported sightings, rainfall, game migration and pre-booked overnight accommodation.
Optional 3 hr sunset drive and 3 hr morning guided walk with Sanparks guide at own cost
Overnight: One of the camps in the Park
Meals: B, L & D

En route stop at the last indigenous San tribe in South Africa, the Khomani. Today these earliest residents of the Kalahari, living here for 40 000 years, consist of only 400 people and are resident in an area between 40 and 70 km south of Twee Rivieren. Clients will have the opportunity to view and purchase their handcraft at one of the roadside stalls. (The presence of the San at the roadside stalls can’t be guaranteed.)
Overnight: Molopo Lodge
Meals: B, L & D

DAY 04 Molopo – Augrabies Falls National Park
Depart to Upington. Wine tasting at the tasting room of the Orange River Wine Cellar in Upington, the second largest cooperative wine cellar in the world. Except for wine and grape juice production, the lower Orange River Valley is the major raisin production area – and one of the major table grape production areas in South Africa.

Continue to Augrabies Falls National Park, which covers 60 000 ha. En route visit to Tierberg Nature Reserve in Keimoes, from where one has a beautiful view of the lush green Orange River Valley. Continue to Kakamas. Stop at Die Pienk Padstal (The Pink Road Stall) which stocks a variety of dried fruit products and local delicacies.

Proceed to Augrabies Falls National Park. Visit the Augrabies Falls, which is the sixth largest waterfall in the world when South Africa’s largest river, the Orange is in flood. The word Augrabies derives from the Khoi meaning “Place of great noise”. Although Augrabies is essentially a scenic park, game such as giraffe, springbok, gemsbok, eland, kudu red hartebeest, Hartman’s zebra and klipspringer survive in this unique riverine ecosystem. Fish eagles and black eagles are common residents and the Rest Camp is home to a variety of bird species.

Do a scenic game drive in this moon landscape-like land to awesome viewpoints such as Ararat, Oranjekom on the Orange River Gorge and the “Swartrante” (Black Hills) from where one has a great view of this arid rocky desert landscape.

The fall is illuminated until 10:00 p.m. Clients can re-visit the fall at their own time and pace.
Optional 2 hr sunset drive with Sanparks guide
Overnight: Augrabies
Meals: B, L & D

DAY 05 Augrabies – Upington
Duration of game drive/activities will depend on clients’ travel schedule from Upington.

Do a relaxed 2km morning walk to a beautiful viewpoint on the Augrabies gorge, Arrow Point followed by a scenic game drive in the Park.

Depart to Upington. The route passes the Persian Water Wheels at Kakamas. Proceed to Keimoes on the Rockery Route, a scenic gravel road south of the Orange River, passing through a large quiver tree forest. Continue via the largest inhabited inland island in South Africa, Kanoneiland, where virtually every inch of soil is under irrigation.

Continue to Upington to be in time for departing flight. Flight schedule to be finalised. (Flight not included)
Meals: L

It is expected from clients on camping tours to assist with pitching and packing up camp and with general camping duties on request. Accommodation can vary from the itinerary depending on availability.