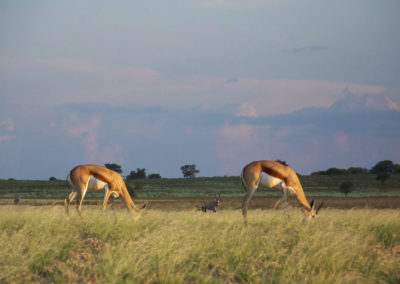 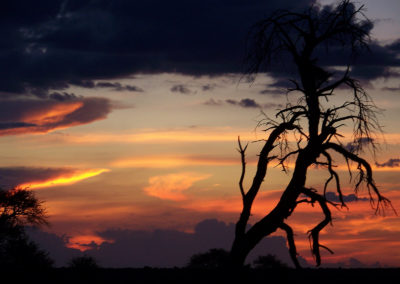 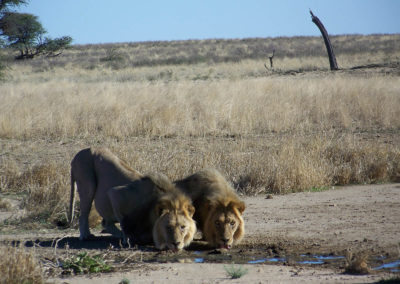 This tour is for people with an adventurous spirit, who prefer more privacy and who are fine with basic facilities. Botswana Campsites are not fenced and predators entering the camping area is common. The chances are good to hear predators call at night. This is a special way of exploring this very special place, the Kgalagadi Transfrontier Park.

DAY 01 Upington – Kgalagadi Transfrontier Park
Time of departure will depend on clients’ travel schedule to Upington. Flight schedule to be finalised. (Flight not included.)

Check in at Two Rivers on the Botswana side of Kgalagadi Transfrontier Park. No passports or visas needed for this tour, due to the fact that entrance and exit is at Two Rivers Gate, without leaving the Park at any other gate.

Game drive to Rooiputs Camp Ground on the Botswana side. Pitch camp. Depart on an afternoon game drive. The Rooiputs area is known for lion, cheetah, spotted & brown hyena and meerkat sightings.

Experience the park, camping in the wild with no protective fencing. Enjoy dinner around the fire, while listening to the sounds of the night. Don’t be surprised if you hear lion, hyena, leopard and black backed jackal during the night. Lions are regular visitors to Rooiputs at night.
Overnight: Rooiputs camping (Basic Facilities; A-frame, pit toilet & open air shower)
Meals: B, L & D

DAY 02 Kgalagadi Trans Frontier Park
Game drive along the Nossob River Valley to Polentswa Camp Ground on the Botswana side of the Park, north of Nossob Camp.

As with Rooiputs, Polentswa has no protective fencing too. This remote campsite overlooks the vegetated Polentswa Pan and is known for beautiful sunsets. Lions, hyenas and brown hyenas are regular visitors to Polentswa at night.
Overnight: Polentswa camping (Basic Facilities; A-frame, pit toilet & open air shower)
Meals: B, L & D

DAY 05 Kgalagadi – Upington
Game drive until noon. Duration of game drive will depend on clients’ travel schedule from Upington.

It is expected from clients on camping tours to assist with pitching and packing up camp and with general camping duties on request.
Due to the fact that Rooiputs has only 6 and Polentswa only 3 campsites, the itinerary can vary from the above according to availability of campsites.