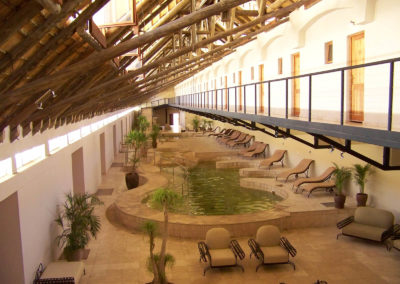 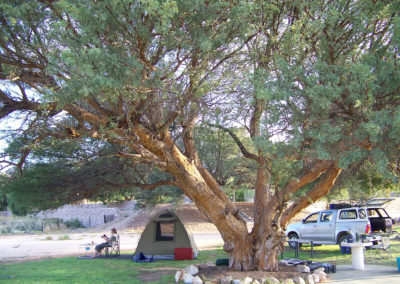 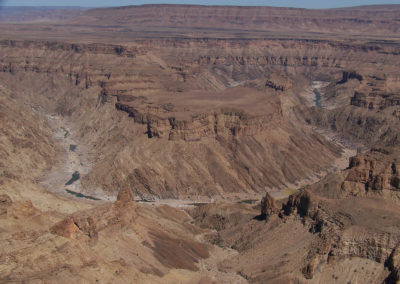 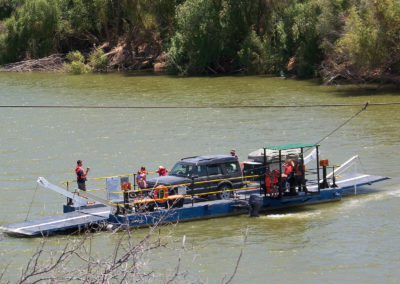 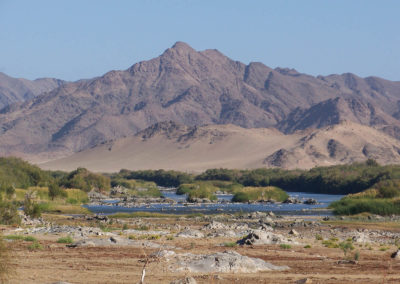 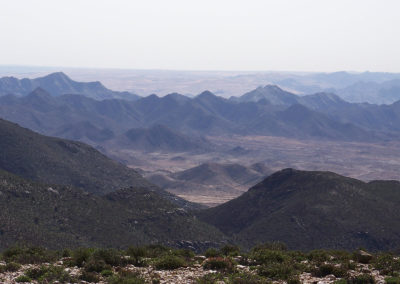 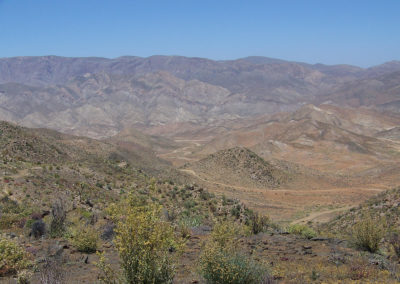 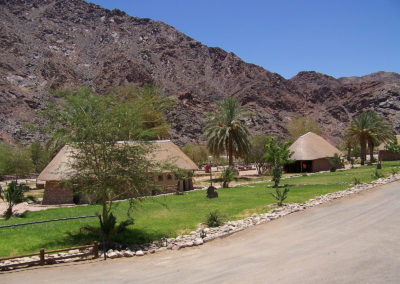 DAY 01 Upington – Ai-Ais/Richtersveld Transfrontier Park
Depart from Upington to Nakop Border Post. Enter Namibia. Proceed via Karasburg through the vast plains of Southern Namibia to The Ai-Ais-Richtersveld Transfrontier Park. This park spans some of the most spectacular scenery of the arid and desert environments in southern Africa. Bisected by the Orange River, which forms the border between South Africa and Namibia, it comprises the Ai-Ais Hot Springs Game Park in Namibia and the Richtersveld National Park in South Africa.

Some of the distinctive features in the area include the Ai-Ais Hot springs and the 2nd largest canyon in the world, the Fish River Canyon. This arid zone is further characterised by a unique and impressive variety of succulent plant species, which makes this park an undisputed biodiversity ‘hot spot’. Ai-Ais, which means, “burning water” in one of the local languages, refers to the sulphurous hot springs which are found in this area. One of these springs has its eye within the camp. Ai-Ais lies at the southern end of the Fish River Canyon. Relax in the warm pools and spa.
Overnight: Ai-Ais Resort or Canon Lodge
Meals: B & D

DAY 02 Ai-Ais/Richtersveld Transfrontier Park
Depart to The Fish River Canyon via Gondwana Nature Park. This awe-inspiring canyon measures 160 km in length, up to 27 km in width and reaches a depth of 550 m. Visit different viewpoints overlooking the canyon. Although the Park is not known as a game park, springbok, gemsbok, red hartebeest, Hartman’s zebra, kudu, klipspringer and ostrich survive in this harsh land. Return to Ai-Ais. Relax in the warm pools and spa.
Overnight: Ai-Ais Resort or Canon Lodge
Meals: B & D

DAY 03 Ais-Ais/Richtersveld
Depart to Sendelingsdrift Border Post through the vast barren plains of southern Namibia. The road runs parallel with the Orange River through Southern Namibia. Enter South Africa by crossing the Orange River by ferry. The Richtersveld Mountain Desert is regarded as the only true desert and one of the last wilderness areas in South Africa and was recently declared a world heritage site. The rainfall in some areas is less than 50 mm per annum. The Park nestles in a 100 km loop of the Lower Orange River, which forms the border with Namibia.

The Richtersveld is regarded as one of the world’s most prolific and richest succulent areas, nurturing 30% of South Africa’s succulent species, including 3 Quiver tree species and the very rare legendary “halfmens”. Although game is not the main attraction of Richtersveld Park, there is species such as the very rare Hartman’s Zebra, Grey Reebok, Klipspringer, Duiker, Steenbok, Leopard, Caracal, Black backed jackal, Baboons and Vervet monkeys. The park harbours a small number of indigenous people, who live their lives as goatherds, unchanged from the time when their hardy ancestors lived.
Overnight: One of the camps in the Park
Meals: B & D

DAY 04 Ais-Ais/Richtersveld
Explore the Park on drives and on foot.
Overnight: One of the camps in the Park
Meals: B & D

DAY 05 Ais-Ais/Richtersveld – Klein Pella
Depart to Alexander Bay on the cold Atlantic Ocean. Visit the estuary at the Orange River mouth near Alexander Bay. This previous restricted diamond area is now open to public. The Orange River Wetland is declared as a RAMSAR site and is home to more than 60 bird species including pelicans and many flamingos. After a drive to the mouth we continue to the Lichen Hill. The Richtersveld vegetation has unique species with awesome adoptions to survive in its semi desert climate. One km outside Alexander Bay, a hill of 5 hectares is covered with lichen – the only one of its kind in South Africa. Lichen is neither plant nor animal, consisting of algae and fungi living together in symbioses. We visit this hill. Continue south along the coastline to the small harbour town Port Nolloth. This is crayfish and diamond country. Visit the harbour with its diamond boats. Continue via Springbok to Klein Pella. Klein Pella is an oasis in the desert, being a grape export farm and having the largest date plantations in the southern hemisphere.
Overnight: Klein Pella Guest Farm
Meals: B & D

DAY 06 Klein Pella – Augrabies Falls National Park – Upington
Depart to Pella Mission Station, dating back to 1814. Two missionaries have built the Old Cathedral, surrounded by date palms, over a period of seven years, using an encyclopaedia as their building manual.

Continue to Augrabies Falls National Park, travelling through the plains of the Northern Bushmanland and the small, but known town, Pofadder. Visit the Augrabies Falls, which is the sixth largest waterfall in the world when South Africa’s largest river, the Orange is in flood. The word Augrabies derives from the Khoi meaning ‘place of great noise. Scenic – and game drive in this moon landscape-like land to awesome viewpoints such as Ararat, Oranjekom on the Orange River Gorge and the “Swartrante” (Black hills) from where one has a great view of this arid rocky desert landscape.

Continue to Upington. Arrive in Upington during the afternoon. End of tour. Accommodation can vary from the itinerary depending on availability.