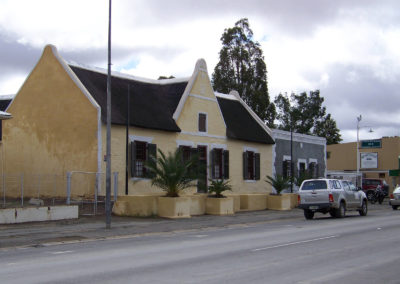 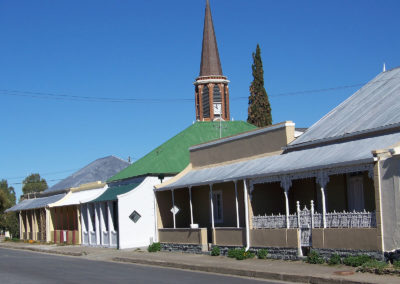 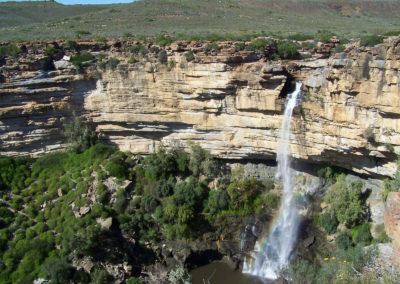 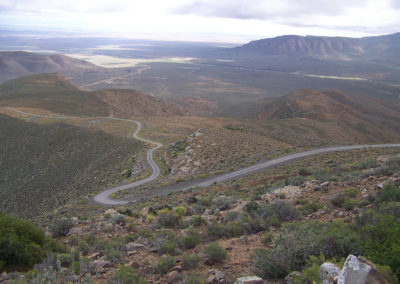 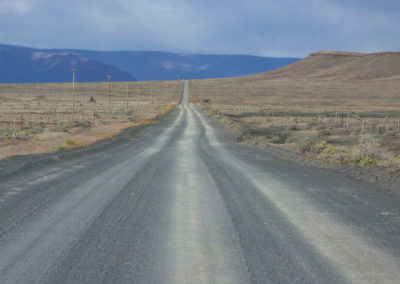 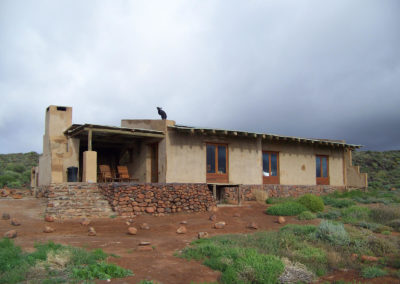 This tour is covering lesser known Karoo towns and ‘backroads’ through the Nama, Tankwa and Upper Karoo. Travel past remote farms, enjoy the hospitality of the local people, indulge in local cuisine and appreciate the wide open desert plains of the Tankwa-Karoo. Watch stars at Sutherland, do game drives in Karoo National Park and have a cold beer in the “Blikkiesbar” in Carnavon. This tour is different!

DAY 01 Upington – Pofadder
Depart to Augrabies Falls National Park. Visit Tierberg Nature Reserve in Keimoes, before taking the Rockery Route to Kakamas via the Quiver Tree Forest. We stop at the Persian Water Wheels in Kakamas before proceeding to Augrabies. En route we do some wine tasting at the second largest cooperative wine cellar in the world, the Orange River Wine Cellar.

After a visit to the falls, we do a short game- and sightseeing drive to awesome viewpoints such as Ararat and Oranjekom. The word Augrabies derives from the Khoi meaning ‘place of great noise. Scenic – and game drive in this moon landscape-like land to awesome viewpoints such as Ararat, Oranjekom on the Orange River Gorge and the “Swartrante” (Black hills) from where one has a great view of this arid rocky desert landscape. Although Augrabies is essentially a scenic park, game such as giraffe, springbok, gemsbok, eland, kudu red hartebeest, Hartman’s zebra and klipspringer survive in this unique riverine ecosystem. Fish eagles and black eagles are common residents.

We proceed on the gravel road to Pofadder. This road goes through the vast plains of the northern Bushmanland with views to the north of the Orange River Valley and the barren mountainous Southern Namibia.
Overnight: Pofadder Hotel
Meals: B & D

DAY 02 Pofadder – Niewoudtville
We travel on dirt roads through the western Bushmanland to Loeriesfontein, including the longest straight road in South Africa measuring more than 80km. This road takes one past remote sheep farms through one of the most sparsely populated areas in South Africa. Loeriesfontein boasts a unique Windpump Museum, of which there are only two in the world (the other is in the USA).

Depart to Niewoudtville situated on the Bokveld escarpment. On route we visit the largest Quiver Tree Forest in South Africa and the 100m high Niewoudtville Water Fall on the Doring River. Niewoudtville is known for its unique vegetation, with the biggest variety of bulbous plants in the world. This small town with its warm sandstone buildings is situated in a flat landscape covered by wheat, heather and proteas due to higher rainfall close to the edge of the escarpment. During spring the area changes into a colourful carpet of spring flowers. 8 Km from town is a majestic view from the top of Van Rhyns Pass over the Knersvlakte.

Attractions include the Wild Flower Reserve on Glen Lyon with displays of over 500 000 endemic Bulbinella, Glacial Rock Striations from Permian era 280 million years ago, Khoisan Rock Paintings on Papkuilsfontein and the impressive NG Church built from sandstone.
Overnight: Guest House
Meals: B & D

DAY 03 Niewoudtville – Tankwa Karoo National Park
Depart to Calvinia. Stop for a cup of tea at the historical Hantam House. Other interesting sites are South Africa’s largest Post Box and the well maintained Calvinia Museum and “Makadas’, the last steam locomotive on the one way railway line to Calvinia, which has closed down.

Continue on dirt road via the Bloukrans Pass to Tankwa Karoo National Park. The Park is situated on the southern boundary of the Northern Cape with the Roggeveld Escarpment in the East, Cederberg in the West, and Klein Roggeveld Mountains in the South. This unique national park covers 111,000 ha and is situated within the Succulent Karoo Biome where you’ll find rare and endangered plant species, rich endemic birdlife, and landscapes that will take your breath away – from the sheer cliffs of the Roggeveld Escarpment to the moonscapes of the Tankwa Desert.

Although the park is home to small numbers of Red hartebeest, gemsbok, springbok and steenbok and predators such as leopard, caracal, African wildcat and black backed jackal, sightings are rare. Tankwa Karoo National Park is the ideal destination for those seeking the brightest stars in Africa, a once in a lifetime glimpse of a rare endemic bird or perhaps nothing more than a silence that reaches deep into the soul.
Overnight: Elandsberg Cottage
Meals: B & D

DAY 04 Tankwa Karoo – Sutherland
Travel through the park to exit gate. Depart on back roads to Sutherland crossing the Ouberg Pass, from where one has a panoramic view of the lower-lying Karoo and the Ceres Karoo Mountains about 200km away.

Sutherland, the coldest place in South Africa, is situated on the Roggeveld Plateau 1450m above sea level and is known for its clear night skies and cold, biting winters. With weather conditions like this Sutherland is home to the world-renowned South African Astronomical Observatory. The site houses ten telescopes, one being SALT (Southern Africa Largest Telescope). SALT is the largest single, optical telescope in the southern hemisphere, with a hexagonal mirror, 11 metres across. SALT is housed in a dome seven storeys high. Qualified observers conduct tours of the observatory. Experience a night tour where one can view interesting objects in the sky through two visitor telescopes, a 16” Meade and 14” Celestron Telescope.

Other attractions are the NG Church, which was occupied by British troops during the Anglo-Boere War and the Louw Museum, which is the birthplace of two famous Afrikaans poet writers, NP van Wyk Louw and W.E.G Louw.
Overnight: Kambro Kind B&B or similar
Meals: B & D

DAY 05 Sutherland – Karoo National Park
Do a guided tour of the observatory including a visit to Salt. Depart to Fraserburg. This area is known for important fossil discoveries of which some is exhibited in the old parsonage museum. Visit the Gansfontein Paleo Surface where there is a distinct trace fossil of a gastropod of which a similar trace was recently discovered in Antarctica. Other visits can include the unique six-sided structure the Pepperpot and the old power station where the seven Lister Blackstone engines may still be seen and well maintained colonial style houses.

The Karoo National Park has a wide variety of endemic wildlife. Many species have been relocated to their former ranges – such as Black rhino and Cape buffalo, as well as Cape mountain zebra. The park is also home to Red Hartebeest, Black Wildebeest, Eland, Burchell’s Zebra, Kudu, Springbok and Klipspringer.

Over 20 breeding pairs of black eagle find sanctuary within the park and large numbers of lesser kestrels are summer visitors. Karoo Korhaan, Ludwig’s Bustard and Namaqua Sandgrouse are common residents. There is also a wide diversity of succulent plants and small reptiles.
Overnight: Chalet at Karoo National Park
Meals: B & D

DAY 07 Karoo National Park – Carnavon
Morning game drive. Depart to Loxton, a small town of which two thirds have washed away in flash floods in 1961. The road goes via Rosesberg and Molteno Passes.

Continue to Carnavon. This area is known for the corbelled houses, a unique style of building, used by the Trekboers. These small domed houses were completely built of flat stones, because of the lack of wood for trusses. Cement was a mixture of chaff and soil and the floors were of earth coloured a rich red by a mixture of fat and oxblood polished with a flat stone. Visit the Museum & Corbelled House and Appie van Heerden Nature Reserve with a variety of wildlife. End off the day with a drink in the “Blikkiesbar”, a bar with a large collection of beer cans and whiskies at the Carnavon Hotel.
Overnight: Carnavon Hotel
Meals: B & D

DAY 08 Carnavon – Upington
Proceed to Van Wyksvlei, a small town lying close to the first state funded dam with a unique earthen wall, built in 1882. Continue to Verneuk Pan (Deception Pan), a vast dry pan where the track can still be seen on which Sir Donald Campbell tried to set a new land-speed record in 1929 in Bluebird 1. Continue via Kenhardt to Keimoes. Kenhardt is the ‘Dorper capital’. The Dorper sheep was bred in South Africa from the Dorset Horn from the UK and the Persian sheep from Somalia. The Dorper is able to produce good quality mutton in very dry areas. Our next stop is at the largest inhabited inland island in South Africa, Kanoneiland, where virtually every inch of soil is under irrigation. Arrive in Upington during the afternoon. End of the tour.