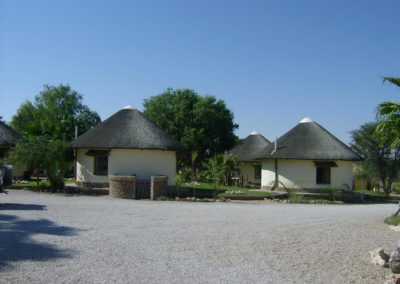 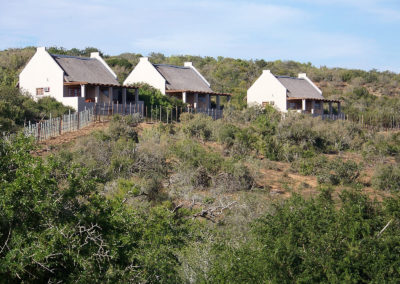 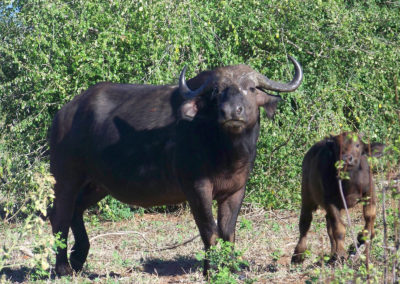 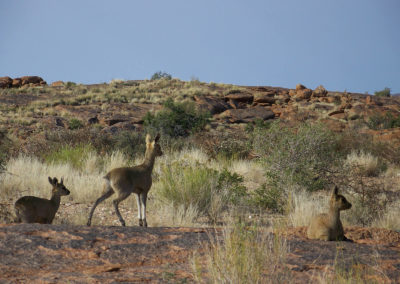 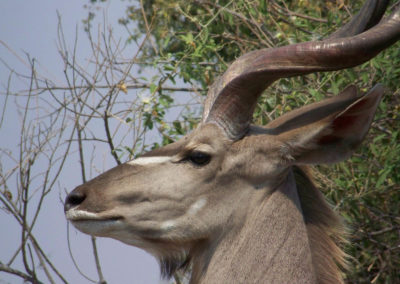 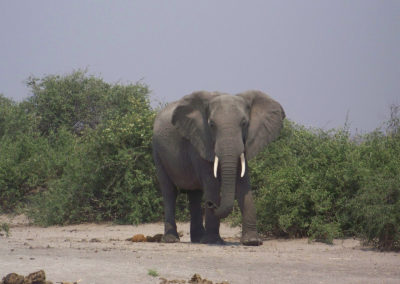 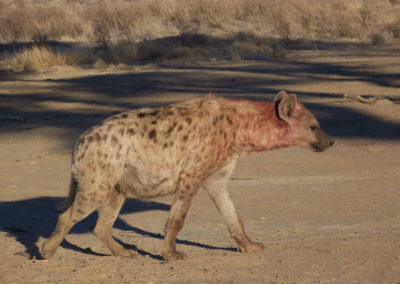 This underrated Big Five wildlife tour in a malaria free area, is a unique combination of National Parks, landscapes and wildlife species. The big cats, meerkat and raptors of the Kgalagadi, Hartmann’s mountain zebra and klipspringer of Augrabies, black rhino and Verraux’s eagles of Karoo, Cape mountain zebra and black wildebeest of Mountain Zebra, elephants and Cape buffalo of Addo are only a few of the special wildlife species to observe on this tour. Excellent facilities contribute to a relaxed experience with great rewards

DAY 02 Kgalagadi Trans Frontier Park
Morning and afternoon game drives. The route will be determined by reported sightings, rainfall, game migration and pre-booked overnight accommodation.
Optional 3 hr sunset drive and 3 hr morning guided walk with Sanparks guide at own cost
Overnight One of the camps in the Park
Meals: B, L & D

En route stop at the last indigenous San tribe in South Africa, the Khomani. Today these earliest residents of the Kalahari, living here for 40 000 years, consist of only 400 people and are resident in an area between 40 and 70 km south of Twee Rivieren. Clients will have the opportunity to view and purchase their handcraft at one of the roadside stalls. (The presence of the San at the roadside stalls can’t be guaranteed.)
Overnight: Molopo Lodge
Meals: B, L & D

DAY 04 Molopo – Augrabies Falls National Park
Depart to Upington. Wine tasting at the tasting room of the Orange River Wine Cellar in Upington, the second largest cooperative wine cellar in the world. Except for wine and grape juice production, the lower Orange River Valley is the major raisin production area – and one of the major table grape production areas in South Africa.

Depart to the largest inhabited inland island in South Africa, Kanoneiland, where virtually every inch of soil is under irrigation. Continue to Tierberg Nature Reserve in Keimoes, from where one has a beautiful view of the lush green Orange River Valley.

Proceed to Kakamas on the Rockery Route, a scenic gravel road south of the Orange River, passing through a large quiver tree forest. The route passes the Persian Water Wheels at Kakamas.
Stop at Die Pienk Padstal (The Pink Road Stall) in Kakamas, which stocks a variety of dried fruit products and local delicacies.

Continue to Augrabies Falls National Park, which covers 60 000 ha. Visit the Augrabies Falls, which is the sixth largest waterfall in the world when South Africa’s largest river, the Orange is in flood. The word Augrabies derives from the Khoi meaning “Place of great noise”. Although Augrabies is essentially a scenic park, game such as giraffe, springbok, gemsbok, eland, kudu red hartebeest, Hartman’s zebra and klipspringer survive in this unique riverine ecosystem. Fish eagles and black eagles are common residents and the Rest Camp is home to a variety of bird species.

The fall is illuminated until 10:00 p.m. Clients can re-visit the fall at their own time and pace.
Optional 2 hr sunset drive with Sanparks guide
Overnight: Augrabies
Meals: B, L & D

Do a scenic game drive in this moon landscape-like land to awesome viewpoints such as Ararat, Oranjekom on the Orange River Gorge and the “Swartrante” (Black Hills) from where one has a great view of this arid rocky desert landscape.

Continue on a circular drive to the Western Section, where the chances are good to see Hartmann’s mountain zebra and eland. There are many quiver trees along this route.

Afternoon at leisure. Augrabies Falls can be explored in full along the stilted walkways and viewpoints.
Overnight: Augrabies
Meals: B, L & D

If the condition of the dirt roads are not good, according to road reports, an alternative asphalt route via the N10, N12 & N1 national roads will be used instead.

Beaufort West dates back to 1818 and is the birthplace and hometown of the late Professor Chris Barnard, the famous heart surgeon who performed the first successful human-to-human heart transplant.

Expected time of arrival at Karoo National Park is mid-afternoon. Check in at chalets. Time at leisure.

Depart on a short afternoon game drive on the Lammertliesleegte Loop. The Karoo National Park has a wide variety of endemic wildlife. Many species have been relocated to their former ranges – such as black rhino and Cape buffalo, as well as Cape mountain zebra. Large herbivores such as red hartebeest, black wildebeest, eland, Burchell’s and Hartmann’s Mountain zebra, kudu, springbok and klipspringer are regularly seen.

Time at leisure until mid-afternoon. Do a short informative walk on the 300 m long Fossil Trail. This impressive collection of whole skeletons, skulls and bones are the remains of extinct Karoo wildlife from some 255 million years ago during the Permian Period. The displayed fossils belong to a group of mammal-like reptiles called Therapsids, which gave rise to modern mammals.

DAY 08 Karoo National Park – Mountain Zebra National Park
Depart to Graaff-Reinet on the banks of the Sundays River. Graaff-Reinet is the fourth oldest town in South Africa dating back to 1786 and is home to more national monuments than any other town or city in South Africa, numbering more than 220. Places of interest are the Dutch Reformed Church in the center of the town built in 1887 – the building is influenced by the architecture of Salisbury Cathedral in England, Reinet House Museum, a typical Cape Dutch building, formerly the Dutch Reformed Church parsonage and the Karoo architecture of Stretch’s Court, a picturesque restored street of Karoo cottages with brightly painted shutters and doors.

Continue to Cambedoo National Park near Graaff-Reinet. Formed hundreds of millions of years ago, the Karoo of South Africa is one of the great natural wonders of the world. Camdeboo National Park covers 19 405 ha and surrounds the town of Graaff-Reinet in the Eastern Cape and provides the visitor with insights into the unique landscape and ecosystem of the Karoo, not to mention awesome scenic beauty in the Valley of Desolation where dolerite pillars rise to heights of 90 – 120 metres.
Camdeboo National Park supports a diverse spectrum of wildlife including Cape buffalo, Cape mountain zebra, kudu, red hartebeest, gemsbok, steenbok, springbok, blesbok, black wildebeest grey duiker, klipspringer and 13 smaller carnivore species. At least 225 bird species have been recorded in the park, with species typical of both the Great Karoo and Eastern region.
Do a short scenic game drive through the park including a short hike to the view point of the Valley of Desolation. Continue on a game drive trail through the Nqweba Dam section of the park.

Continue to Mountain Zebra National Park. The Mountain Zebra National Park lies near Cradock in the Eastern Cape. The proclamation of the park in 1937 saved the Cape mountain zebra from extinction, starting with a small founder herd of only 06 zebra and currently their population stands at 300 where they roam 28 412 hectares of land. Other mammals found here include the Cape buffalo, black rhino, eland, black wildebeest, red hartebeest, gemsbok, blesbok, springbok, duiker and steenbok while mountain reedbuck, grey rhebok and klipspringer frequent the higher areas and kudu the wooded valleys. Lion, which were recently re-introduced, cheetah, caracal, brown hyena and aardwolf are the larger carnivores in the Park. Meerkat are common residents in the Park.

Do a game drive to the Rest Camp. Check in at accommodation. Depart on a short game drive.

DAY 09 Mountain Zebra National Park
Depart on a morning game drive until noon. The chances are good to have sightings of less common species such as black wildebeest, Cape mountain zebra and Cape buffalo. Cheetahs are seen regularly and the park is home to many meerkat families with good sightings possible in certain areas, especially on the Ubejane Loop. This park is one of the best places to see, with luck, caracal and aardwolf.

Short hikes can be done on demarcated paths in the Rest Camp area.

DAY 10 Mountain Zebra Park – Addo Elephant National Park
Depart on a morning game drive to the exit gate. Continue via Cradock to Daggaboer Road Stall. Stop for a cup of coffee/tea or alcohol free homemade ginger beer. The shop has a variety of homemade condiments and jams and souvenirs to choose from.

Continue to Addo Elephant Park. Addo Elephant National Park covers 164 000 ha and lies within the dense valley bushveld of the Sundays River region of the Eastern Cape. Addo National Elephant Park is in the process of expanding into a 360 000 ha mega-park, including a 120 000 ha marine reserve. The original elephant section of the park was proclaimed in 1931, when only 11 elephants remained in the area.

Today this finely tuned ecosystem is sanctuary to over 450 elephants, 400 Cape buffalo, 50 black rhino, lions, spotted hyenas, leopard, a variety of antelope species including eland, kudu, red hartebeest, bushbuck as well as the unique flightless dung beetle, found almost exclusively in Addo. Addo is also home to Meerkat and there were very good sightings on previous tours. Due to a variety of habitats Addo offers excellent birding opportunities.

Check in at accommodation. Time at leisure. Depart on an afternoon game drive.

DAY 12 Addo Elephant National Park – Port Elizabeth
Depart on a morning game drive to Mathyolweni Gate in the south. Exit the park Continue to Port Elizabeth. Drop-off at the Port Elizabeth Airport or at accommodation. Flight schedule to be finalised. (Flight/accommodation not included)