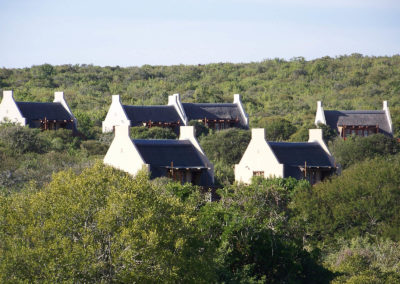 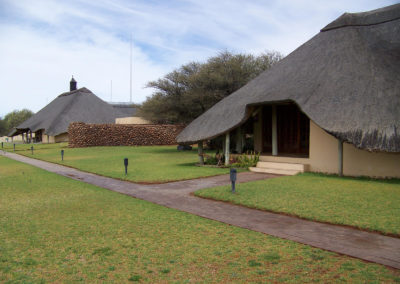 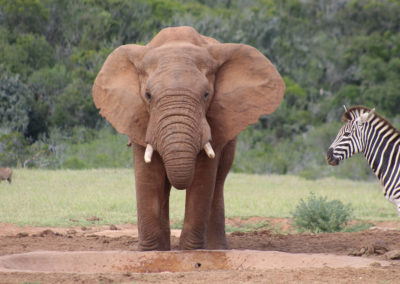 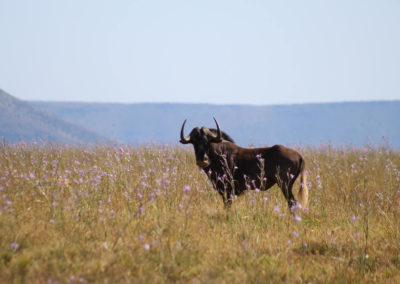 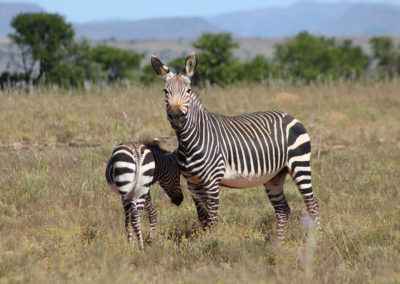 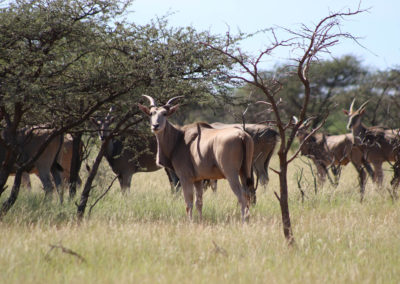 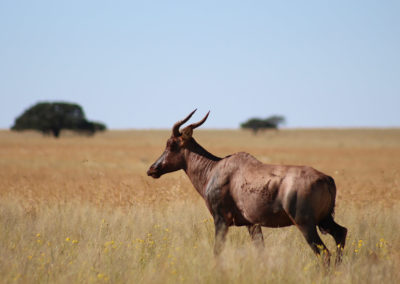 This Big Five tour in a malaria free area starts with the Big Hole and the intriguing Diamond Rush history of Kimberley and a glimpse of the Anglo-Boer War Battlefields on route to Mokala, home of endangered species and wide variety of other wildlife species. Add the black rhino and Verraux’s eagles of Karoo, Cape mountain zebra and black wildebeest of Mountain Zebra and elephants and Cape buffalo of Addo. These are only a few of the special wildlife species to observe on this tour. Excellent facilities and good roads contribute to a relaxed experience with great rewards.

DAY 01 Kimberley – Mokala
Time of departure will depend on clients’ travel schedule to Kimberley. Flight schedule to be finalised. (Flight not included)

Depart to Kampher’s Dam just outside Kimberley, where greater flamingoes and the largest population of lesser flamingoes in Southern Africa, numbering about 25 000, are residents.

Visit the Big Hole Complex. A visit to Kimberley has to include a tour of the Big Hole and recently renovated Kimberley Mine Museum. The Big Hole is the largest hand-dug excavation in the world and the Mine Museum takes one back to a diamond-digging era more than a hundred years ago.

Do a guided tour at 09:00 a.m. with a site guide of the Big Hole and Mine Museum. The tour includes a 15 minute film of the history of Kimberley and the Diamond Fields, The Big Hole, a replica of an underground mine tunnel as well as a visit to the largest public display of diamonds in the world. The duration of the tour is about 01 hour.

Depart to Mokala National Park 40km south of Kimberley. The route passes the Anglo Boere War Battlefields of Magersfontein and Modder River, The Battle of Magersfontein was fought on 11 December 1899 on the borders of the Cape Colony and the independent Republic of the Orange Free State. British forces under Lieutenant General Lord Methuen were advancing north along the railway line from the Cape in order to relieve the Siege of Kimberley, but their path was blocked at Magersfontein by a Boer force that was entrenched in the surrounding hills. The British had already fought a series of battles with the Boers, most recently at Modder River, where the advance was temporarily halted.

Lord Methuen failed to perform adequate reconnaissance in preparation for the impending battle, and was unaware that Boer Veggeneraal (Combat General) De la Rey had entrenched his forces at the foot of the hills rather than the forward slopes as was the accepted practice. This allowed the Boers to survive the initial British artillery bombardment. When the British troops failed to deploy from a compact formation during their advance, the defenders were able to inflict heavy casualties. The Highland Brigade suffered the worst casualties, while on the Boer side, the Scandinavian Corps was destroyed. The Boers attained a tactical victory and succeeded in holding the British in their advance on Kimberley. The battle was the second of three battles during what became known as the Black Week of the Second Boer War.

Following their defeat, the British delayed at the Modder River for another two months while reinforcements were brought forward. General Lord Roberts was appointed Commander in Chief of the British forces in South Africa and moved to take personal command of this front. He subsequently lifted the Siege of Kimberley and forced Boer General Cronje to surrender with 5 000 men on 27 Feb 1900 at the Battle of Paardeberg after holding out for 11 days, being surrounded and attacked by a British Force of 15 000. This was a serious setback in defending the two Boer Republics of the Orange Free State and Transvaal against the advancing British Forces. The war lasted until 31 May 1902 when the Boer forces surrendered.

Continue to nearby Mokala National Park. Mokala is South Africa’s newest park and is situated 80 km south of the diamond city Kimberley in the Northern Cape Province and covers nearly 30 000 ha. The land of the previous Vaalbos National Park near Barkly West was handed back to local people and in a huge operation more than 800 head of game was trans-located from Vaalbos to Mokala. The grassy plains studded with camelthorn trees and isolated dolerite hills give Mokala a typical African feeling.

Mokala is home to many endangered species including black- and white rhino, Cape buffalo, roan antelope, sable antelope and tsessebe. Other species include black & blue wildebeest, giraffe, eland, kudu, gemsbok, red hartebeest, Burchell’s zebra, waterbuck, nyala, springbok, steenbok, duiker and mountain reedbuck. Mokala is home to many meerkat families and they are easy to spot on the grassy plains.

Various bird species, including a white-backed vulture breeding colony numbering 200 birds and many lizard species can be seen in Mokala and leopard tortoises are common sightings in summer.

Enter the park at Mosu Gate. Proceed on a game drive on the entrance route to Mosu Lodge. Check in at accommodation.

Depart on an afternoon game drive if time allows Return to accommodation. Relax at accommodation or at the waterhole.

Optional activities at own cost include sunset/night drive and San rock art drive with an open vehicle and a Sanparks guide. Activities have to be booked in advance at reception.
Overnight: Chalet at Mosu Lodge / Camping at Motswedi
Meals: B, L & D

DAY 02 Mokala National Park
Depart at 06:00 a.m. on a 03-hour morning game drive with a Sanparks guide in on open game drive vehicle. Return to camp for breakfast.

Do a short game drive in the tour vehicle. Visit the Interpretive Centre. Return to the lodge. Time at leisure before and after lunch.

Depart on an afternoon game drive in the tour vehicle to the Lilydale Section. Black wildebeest & roan antelope are seen regularly in this area. Visit the hide overlooking a waterhole.
Overnight: Chalet at Mosu Lodge / Camping at Motswedi
Meals: B, L & D

DAY 03 Mokala – Karoo National Park
Depart to Beaufort-West. Beaufort West dates back to 1818 and is the birthplace and hometown of the late Professor Chris Barnard, the famous heart surgeon who performed the first successful human-to-human heart transplant.

Expected time of arrival at Karoo National Park is mid-afternoon. Check in at chalets. Time at leisure.

Depart on a short afternoon game drive on the Lammertliesleegte Loop. The Karoo National Park has a wide variety of endemic wildlife. Many species have been relocated to their former ranges – such as black rhino and Cape buffalo, as well as Cape mountain zebra. Large herbivores such as red hartebeest, black wildebeest, eland, Burchell’s and Hartmann’s Mountain zebra, kudu, springbok and klipspringer are regularly seen.

Optional day/night drives at own cost in open vehicle with a Sanparks guide. Enquiries and bookings at reception.
Overnight: Karoo National Park
Meals: B, L & D

Time at leisure until mid-afternoon. Do a short informative walk on the 300 m long Fossil Trail. This impressive collection of whole skeletons, skulls and bones are the remains of extinct Karoo wildlife from some 255 million years ago during the Permian Period. The displayed fossils belong to a group of mammal-like reptiles called Therapsids, which gave rise to modern mammals.

DAY 05 Karoo National Park – Mountain Zebra National Park
Depart to Graaff-Reinet on the banks of the Sundays River. Graaff-Reinet is the fourth oldest town in South Africa dating back to 1786 and is home to more national monuments than any other town or city in South Africa, numbering more than 220. Places of interest are the Dutch Reformed Church in the center of the town built in 1887 – the building is influenced by the architecture of Salisbury Cathedral in England, Reinet House Museum, a typical Cape Dutch building, formerly the Dutch Reformed Church parsonage and the Karoo architecture of Stretch’s Court, a picturesque restored street of Karoo cottages with brightly painted shutters and doors.

Continue to Cambedoo National Park near Graaff-Reinet. Formed hundreds of millions of years ago, the Karoo of South Africa is one of the great natural wonders of the world. Camdeboo National Park covers 19 405 ha and surrounds the town of Graaff-Reinet in the Eastern Cape and provides the visitor with insights into the unique landscape and ecosystem of the Karoo, not to mention awesome scenic beauty in the Valley of Desolation where dolerite pillars rise to heights of 90 – 120 metres.
Camdeboo National Park supports a diverse spectrum of wildlife including Cape buffalo, Cape mountain zebra, kudu, red hartebeest, gemsbok, steenbok, springbok, blesbok, black wildebeest grey duiker, klipspringer and 13 smaller carnivore species. At least 225 bird species have been recorded in the park, with species typical of both the Great Karoo and Eastern region.
Do a short scenic game drive through the park including a short hike to the view point of the Valley of Desolation. Continue on a game drive trail through the Nqweba Dam section of the park.

Continue to Mountain Zebra National Park. The Mountain Zebra National Park lies near Cradock in the Eastern Cape. The proclamation of the park in 1937 saved the Cape mountain zebra from extinction, starting with a small founder herd of only 06 zebra and currently their population stands at 300 where they roam 28 412 hectares of land. Other mammals found here include the Cape buffalo, black rhino, eland, black wildebeest, red hartebeest, gemsbok, blesbok, springbok, duiker and steenbok while mountain reedbuck, grey rhebok and klipspringer frequent the higher areas and kudu the wooded valleys. Lion, which were recently re-introduced, cheetah, caracal, brown hyena and aardwolf are the larger carnivores in the Park. Meerkat are common residents in the Park.

Do a game drive to the Rest Camp. Check in at accommodation. Depart on a short game drive.

DAY 06 Mountain Zebra National Park
Depart on a morning game drive until noon. The chances are good to have sightings of less common species such as black wildebeest, Cape mountain zebra and Cape buffalo. Cheetahs are seen regularly and the park is home to many meerkat families with good sightings possible in certain areas, especially on the Ubejane Loop. This park is one of the best places to see, with luck, caracal and aardwolf.

Short hikes can be done on demarcated paths in the Rest Camp area.

DAY 07 Mountain Zebra Park – Addo Elephant National Park
Depart on a morning game drive to the exit gate. Continue via Cradock to Daggaboer Road Stall. Stop for a cup of coffee/tea or alcohol free homemade ginger beer. The shop has a variety of homemade condiments and jams and souvenirs to choose from.

Continue to Addo Elephant Park. Addo Elephant National Park covers 164 000 ha and lies within the dense valley bushveld of the Sundays River region of the Eastern Cape. Addo National Elephant Park is in the process of expanding into a 360 000 ha mega-park, including a 120 000 ha marine reserve. The original elephant section of the park was proclaimed in 1931, when only 11 elephants remained in the area.

Today this finely tuned ecosystem is sanctuary to over 450 elephants, 400 Cape buffalo, 50 black rhino, lions, spotted hyenas, leopard, a variety of antelope species including eland, kudu, red hartebeest, bushbuck as well as the unique flightless dung beetle, found almost exclusively in Addo. Addo is also home to Meerkat and there were very good sightings on previous tours. Due to a variety of habitats Addo offers excellent birding opportunities.

Check in at accommodation. Time at leisure. Depart on an afternoon game drive.

Continue on a game drive until noon. Most of the game drive routes will be covered on the morning game drives.