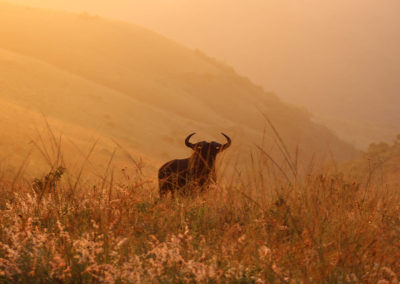 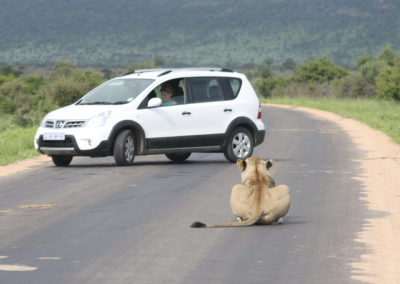 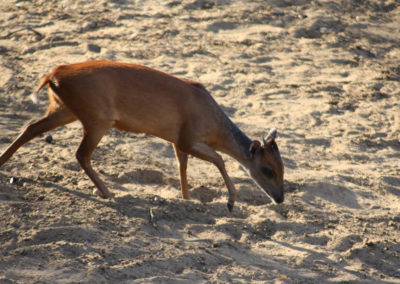 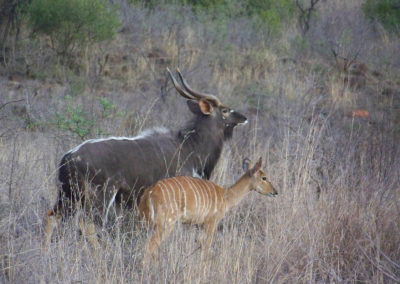 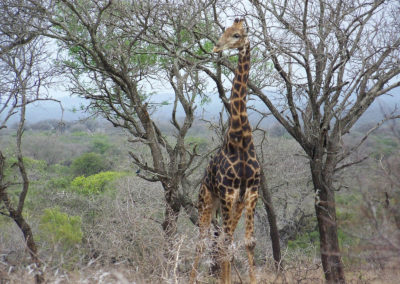 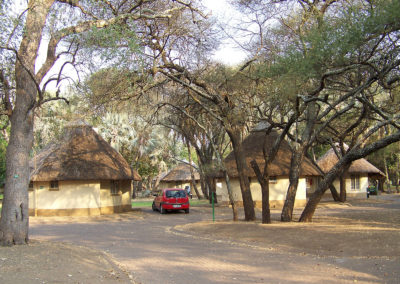 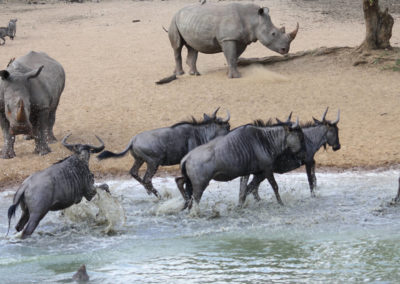 This tour is combination of the landscapes of Golden Gate National Park and Isamgaliso Wetland Park with the Game Reserves of KZN-Ezemvelo in KwaZulu-Natal Province, Hlane Royal National Park in Swaziland and southern Kruger National Park South Africa. All parks are easy accessible which contribute to a relaxed tour with great landscapes and wildlife.

DAY 01 Johannesburg – Golden Gate Highlands Park
Time of departure will depend on clients’ travel schedule to OR Tambo International. Flight schedule to be finalised. (Flight not included)

Depart from Johannesburg to Golden Gate Highlands National Park. The park is nestled in the foothills of the Maluti Mountains of the north eastern Free State. The park derives its name from the brilliant shades of gold cast by the sun on the park’s sandstone cliffs, especially the imposing Brandwag rock, keeping vigil over the main rest camp.

Check in at Glen Reenen Camp and continue to accommodation at Highlands Mountain Retreat. Close your eyes and allow your senses to totally relax. Breathe in the crisp, fresh mountain air and slowly allow your eyelids to open. Take in the awesome view of the overlapping mountain range, all the while knowing that you are standing 2200m above sea-level, the only place in South Africa at this height

A great escape for the mind, body and soul… the recently released Highlands Mountain Retreat, is a luxury camp in Golden Gate that has certainly been worth the wait.

DAY 02 Golden Gate Highlands Park – Ithala Game Reserve
Depart via Van Reenens Pass to Ithala Game Reserve. Situated in the rugged, mountainous thornveld of northern KwaZulu-Natal, Ithala Game Reserve’s multitude of habitats host a spectacular array of wildlife species. Its scenic beauty aside, Ithala’s most characteristic feature is perhaps its astonishing geological diversity. Some of the oldest rock formations in the world are found here, dating back 3 000 million years. With a topographic profile varying from 400m above sea level in the north to 1 450m near Louwsberg in the south, Ithala’s terrain extends over lowveld and densely vegetated riverine valleys to high-lying grassland plateaus, ridges and cliff faces.

Sightings of large birds at Ithala may include black eagles, lappet faced and white-backed vultures, ostriches and secretary birds. Redbilled oxpeckers were reintroduced to Ithala and they now breed successfully in the park.

DAY 03 Ithala Game Reserve – Hluluwe Imfolozi Game Reserve.
Scenic game drive out of park. Continue to Hluluwe Imfolozi Game Reserve. Set in the heart of Zululand in Kwazulu-Natal Hluhluwe Imfolozi is the oldest game reserve in Africa and one of South Africa’s most popular game parks. The Park covers some 96 000 ha and contains an immense diversity of fauna and flora. Hluhluwe is characterized by hilly topography, and the northern section of the park is noted for its wide variety of both bird and animal life. As the home of Operation Rhino in the 1950s and 60s, the Park became world renowned for its white rhino conservation.

The wide range of plant life in the park gives rise to a diversity of mammals, birdlife, reptiles and amphibians. The Big Five – lion, rhino (black & white) elephant, buffalo and leopard are all to be seen in the park, as well as a variety of other species, including cheetah, wild dog and giraffe. It is also one of the best places in the world to see nyala.
Overnight: Hilltop Chalet / Camping at Bushbaby Lodge
Meals: B, L & D

St Lucia Estuary is the gateway to the Eastern Shores of Lake St Lucia. The region contains the highest vegetated dunes in the world, extensive and diverse wetland systems, as well as coastal grasslands with an associated fauna which includes the Africa’s highest density of common reedbuck. Numerous waterfowl, grassland, forest and sea birds provide an attraction to birdwatchers from around the world. Tourist amenities include the Santa Lucia boat tour, the St Lucia Crocodile Centre and a short self-guided trail through the coastal forest along the edge of the estuary.

Do a scenic game drive through iSimangaliso Wetland Park to St Lucia.

Time at leisure. Shopping time. There is craft market in the main street, with a variety of local craft and wood carvings.

DAY 06 St Lucia – Mkuze Game Reserve.
Continue to Mkuze Game Reserve. Situated in northern Zululand, Mkuze Game Reserve was proclaimed a protected area in 1912. Mkuze covers 40 000 ha and has an astonishing diversity of natural habitats, from the eastern slopes of the Lebombo mountains along its eastern boundary, to broad stretches of acacia savannah, swamps and a variety of woodlands and riverine forest. Animals to be found in the reserve include black and white rhinos, elephant, giraffe, leopard, buffalo, nyala, blue wildebeest, warthog, impala, kudu, the rare suni and other smaller antelope. Larger predators include leopard, cheetah and hyena.

Mkhuze is renowned as a mecca for bird lovers, with more than 420 bird species on record. Two beautiful pans, Nhlonhlela and Nsumo, lie in the north and east respectively, home to communities of hippo, crocodile, pinkbacked and white pelicans, as well as a diversity of ducks and geese which gather in spring. Fish eagles swoop over the pans, snatching prey spotted from their perches in the fever trees.

DAY 07 Mkuze Game Reserve – Tembe Elephant Park
Depart to Ndumo Game Reserve. Ndumo Game Reserve is situated near the Tembe Elephant Park on the Mozambique border in northern KwaZulu-Natal. Ndumo boasts many beautiful pans surrounded with yellow fever trees and extensive wetlands and reedbeds as well as acacia savannah and sand forest. Ndumo is a most rewarding area to view wildlife with game species such as white – and black rhino, nyala, bushbuck, impala, red duiker, suni, hippopotamus and a very large population of crocodiles,
Ndumo Game Reserve is perhaps best known for its magnificent bird life with the highest bird count in South Africa, some 430 species. This varied habitat hosts an astonishing range of aquatic birdlife such as black egret, pygmy geese and flocks of pelicans. The prolific birdlife includes many tropical East African forms at the southern limit of their range. Special sightings for birders include Pell’s fishing owl, the broadbill, and southern banded snake eagle.

Do a game drive in Ndumo

Continue to Tembe Elephant Park. This remote park, deep in an area of sand forests, pans and wetlands in northern Tongaland, lies on the border between KwaZulu-Natal and Mozambique. The diversity of birdlife is spectacular. The park is situated within the sand veld ecological zone and consists mainly of closed woodland and secondary thicket formation. The zone falls within a transition area between tropical and sub-tropical forms and therefore is home to a great diversity of vegetation. With this diversity of habitats Tembe is home to a spectacular variety of animals and birds.

Hlane covers 30 000 hectares of Swazi bushveld, dominated by ancient hardwood vegetation. Hlane is home to lion, elephant and white rhino, with an abundant and diverse bird life, including the highest density of nesting white backed vultures in Africa.

Truly the flagship of the South African national parks, Kruger is home to an impressive number of species: 336 trees, 49 fish, 34 amphibians, 114 reptiles, 507 birds and 147 mammals. Man’s interaction with the Lowveld environment over many centuries – from bushman rock paintings to majestic archaeological sites is very evident in the Kruger National Park.

Kruger is one of the premier game-watching destinations in the world and is home to the Big Five with an estimated 1,500 lion, 12,000 elephant, 2,500 buffalo, 1,000 leopards and 5,000 rhino (black and white). Hippopotamus, giraffe, zebra, warthog and many antelope species roam Kruger. Other large carnivores include cheetah, wild dog and spotted hyena.

With the Kruger National Park being so vast it naturally has a tremendous botanic diversity including 336 tree species. Due to the diverse habitats and various water points, Kruger is an exceptionally rewarding birding Park and has a list of over 500 bird species, some of which are not to be found elsewhere in South Africa . Enter the park at Crocodile Bridge. Game drive to Lower Sabie Camp.

Lower Sabie graces the banks of the Sabie River, one of the few perennial rivers to flow through the Kruger National Park. Visitors cannot but feel soothed by the view towards the river and the Lebombo Mountains beyond.

In this rest camp, the bounty and plenitude of nature are very evident, eloquently symbolised by the most conspicuous of its numerous trees, the mighty sycamore fig, which provides generously for the livelihood of many birds and insects. Watch the endless procession of animals coming to drink at the Sabie River.

DAY 12 Kruger National Park
Game drive to Berg-en-Dal Rest Camp. On the northern and southern sides dry riverbeds and a dam border the camp. There are large trees along the streams and dry riverbeds. Special care has been taken to preserve the natural vegetation in the camp. Berg-en-Dal is also the only camp set in a rugged mountain environment.

Game drives in Berg-en-Dal area. Chances are good to see rhino in the area.
Overnight: Berg-en-Dal
Meals: B, L & D

Drop-off at airport or accommodation (Accommodation/Flight not included)
Meals: L