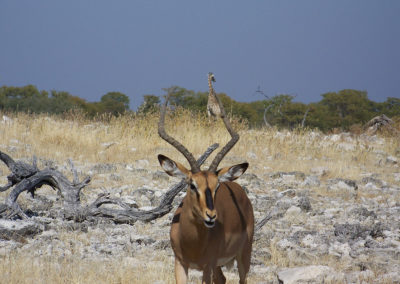 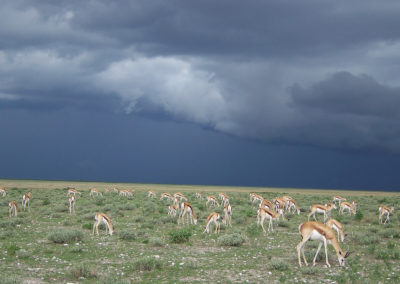 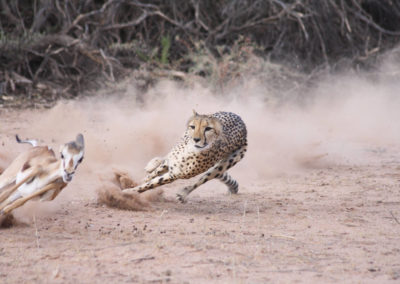 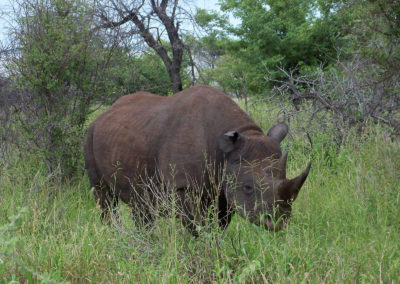 This tour is combination of the wildlife of Kgalagadi Transfrontier Park and Etosha National Park. Kalahari landscapes, abundant raptors, adapted antelope species and big cats of Kgalagadi and the high numbers of game concentrated on the open grass plains and around waterholes in Etosha, make this a unique wildlife tour.

En route visit to the last indigenous San tribe in South Africa, the Khomani. Today these earliest residents of the Kalahari, living here for 40 000 years, consist of only 400 people and are resident in an area between 40 and 70 km south of Twee Rivieren. Clients will have the opportunity to view and purchase their handcraft at one of the roadside stalls. (The presence of the San can’t be guaranteed)

Check in at accommodation at Twee Rivieren.

Depart on an afternoon game drive. All scheduled game drives in Kgalagadi are in the tour vehicle.

The Twee Rivieren area is known for lion, leopard, cheetah and meerkat sightings.
Optional 3 hr sunset drive on an open game drive vehicle and 3 hr morning guided walk with Sanparks guide at own cost
Overnight: Twee Rivieren
Meals: B, L & D (Full Board on all days)

DAY 03 Kgalagadi Trans Frontier Park
Early departure on a game drive along the Auob River Valley to Mata Mata on the Namibian Border. This is cheetah territory and is one the best, if not the best, places in Southern Africa to see cheetah. The Mata Mata area is also known for lion, hyena, African wildcat and giraffe sightings.

Do an afternoon game drive along the Auob River Valley.

Relax around the fireplace, overlooking an illuminated waterhole. Predators are regular visitors.

DAY 05 Windhoek – Etosha National Park
Depart to Okahandja, home of the woodcarvers of Namibia where we stop to give guests the opportunity to view and purchase from a wide variety of African craft.

Continue to Etosha National Park via Otjiwarongo and Outjo. Enter the Park at Anderson Gate in the south. The Park covers an area of 22 270 square km. Etosha Pan is 120 km long and 72 km at its widest. Four of the big five species, elephant, black rhino, lion and leopard, are in the Park. Except for the rare and endemic black-faced impala and Damara dik-dik, giraffe, red hartebeest, gemsbok, eland, kudu, cheetah, hyena and large herds of wildebeest, springbok and zebra are common.

After arrival, an afternoon game drive can be done to Okondeka Waterhole where the chances are good to see lion and to the nearby Newbrowni Waterhole where there is always animal activity. An alternative option is to relax and watch the wildlife activities at the waterhole at the Rest Camp.

Game watching at night at the flood-lit Okaukeujo Waterhole at own time.

DAY 06 Etosha National Park
Depart at on a game drive to Halali Rest Camp. Take the loop route via Newbrowni, Gemsbokvlakte, Olifantsbad and Aus Waterholes. Continue via Homob, Sueda and Salvadora Waterholes to Rietfontein Waterhole, one of the most popular waterholes in Etosha and burial site of Johanna Alberts, wife of the Dorsland (Thirstland) Trek leader Gert Alberts, who died here in 1876. Proceed to Halali Rest Camp.

Depart on an afternoon game drive to Goas Waterhole. Return to Halali.

Game watching at the flood-lit Moringa Waterhole at Halali at own time.
Overnight: Halali
Meals: B, L & D

Do on an afternoon game drive to Klein Okevi, Groot Okevi Waterholes. Re-visit the nearby Klein Namutoni and Chudop Waterholes, where the chances are good to see predator activities.

Game watching at the flood-lit Namutoni waterhole at own time.
Overnight: Namutoni
Meals: B, L & D

DAY 08 Etosha – Windhoek
Early departure to Windhoek to be in time for departing flight. En route we stop at the wood carvers in Okahandja.

Clients can overnight in Windhoek at own cost. Windhoek has a wide range of accommodation facilities to choose from. It is expected from clients on camping tours to assist with pitching and packing up camp and with general camping duties on request.