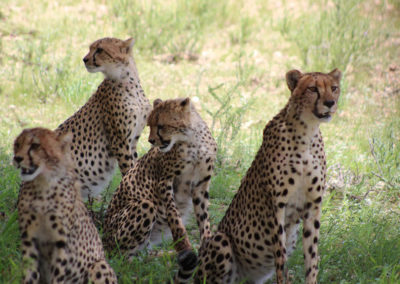 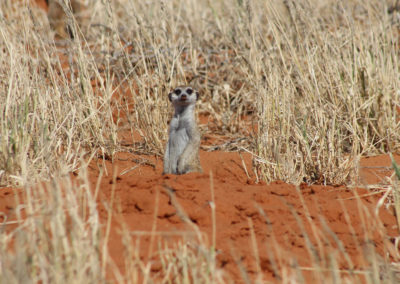 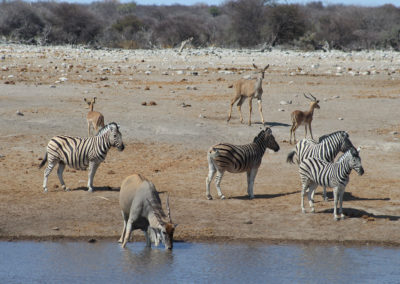 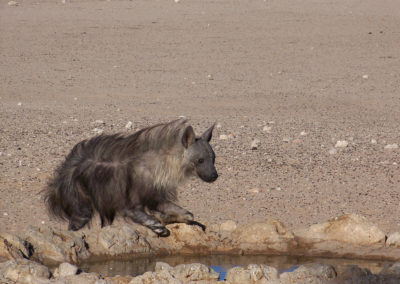 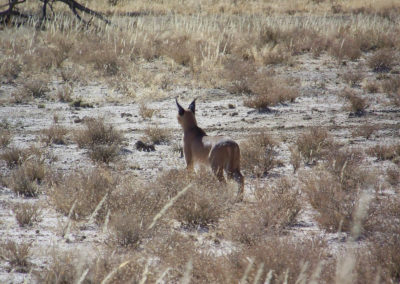 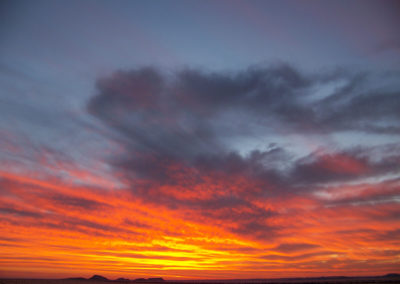 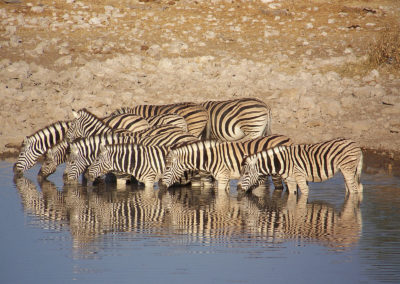 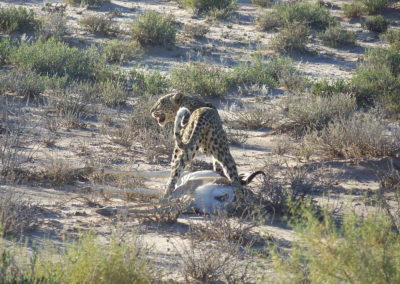 The accommodation is overlooking an illuminated waterhole in the Auob River. Predators are regular visitors at night.

DAY 04 Gochas – Solitaire
Continue through central Namibia via Stampriet to Mariental. Proceed via Maltahohe to Solitaire, where the name says it all. This remote friendly spot in the desert remains a favourite with travellers, and tourists from all over the world make a short stop here. The nostalgic general dealer is known for its home baked bread and apple pie.
Overnight: Solitaire Country Lodge
Meals: B, L & D

DAY 05 Solitaire – Sossus Vlei – Solitaire
Early morning departure to Sesriem. Enter the Namib Naukluft Park. Proceed to Sossusvlei. This primary attraction to Namibia is but a small section of the greater Namib Naukluft Park, which covers an area of more than 49 000 square km. The main attraction is the enormous star dunes. Raising 380 m above the dry Tsauchab River and 220 m above the surrounding sea of sand, these dunes are amongst the highest in the world. Return to Sesriem. Visit Sesriem Canyon in the course of the upper Tsauchab River. Continue to Solitaire
Overnight: Solitaire Country Lodge
Meals: B, L & D

DAY 06 Solitaire – Cape Cross
Depart via Walvis Bay to Swakopmund. The road enters the Namib Naukluft Park again and goes through the barren Kuiseb River Valley, which is one of the most hostile areas in Namibia. From the Kuiseb Valley to Namibia’s main harbour, Walvis Bay, the road crosses the gravel plains of the Namib Desert through Dorob National Park. Gemsbok, springbok, ostrich and with some luck, Hartmann’s mountain zebra can be seen in this vast desert landscape. Visit the Walvis Bay Lagoon where thousands of flamingos and water birds can be seen.

Continue via Namibia’s main holiday town, Swakopmund and along the Skeleton Coast through the Dorob National Park to the Cape Fur Seal colony at Cape Cross, passing the Lichen Fields. Neither plant, nor animal, lichen consists of algae and fungi living together in symbioses. Visit the largest breeding colony of Cape fur seals in Namibia, numbering thousands. Jackals and brown hyenas are regular visitors. At the site of the seal colony is the replica of the cross, planted in 1485 by the first European to set foot in Namibia, the Portuguese explorer Diego Cao.
Overnight: Cape Cross Lodge
Meals: B, L & D

DAY 07 Cape Cross – Twyfelfontein
Continue north through Dorob National Park. Enter the Skeleton Coast Park. Travel parallel with the coastline through this vast barren landscape. Turn inland south of Torra Bay. Beautiful specimen of the prehistoric plant welwitchia mirabilis are along this route. Some of the plants can be as old as 2 000 years. Exit the park at Springbokwasser Gate and proceed through the impressive landscape of Damaraland to Twyfelfontein, a world heritage site. The World Heritage Committee inscribed Twyfelfontein as one of five “cultural landscapes in the world”. Visit the San rock engravings (petroglyphs), where a short, guided hike is done with a local guide.
Overnight: Twyfelfontein Country Lodge (Aba Huab camping)
Meals: B, L & D

Enter the Park at Anderson Gate in the south. The Park covers an area of 22 270 square km. Etosha Pan is 120 km long and 72 km at its widest. Four of the big five species, elephant, black rhino, lion and leopard, are in the Park. Except for the rare and endemic black-faced impala and Damara dik-dik, giraffe, red hartebeest, gemsbok, eland, kudu, cheetah, hyena and large herds of wildebeest, springbok and zebra are common.

After arrival, an afternoon game drive can be done to Okondeka Waterhole where the chances are good to see lion and to the nearby Newbrowni Waterhole where there is always animal activity. An alternative option is to relax and watch the wildlife activities at the waterhole at the Rest Camp.

Game watching at night at the flood-lit Okaukeujo Waterhole at own time.

DAY 09 Etosha National Park
Depart on a game drive to Namutoni Rest Camp. Take the loop route via Newbrowni, Gemsbokvlakte, Olifantsbad and Aus Waterholes. Continue via Homob, Sueda and Salvadora Waterholes to Rietfontein Waterhole, one of the most popular waterholes in Etosha and burial site of Johanna Alberts, wife of the Dorsland (Thirstland) Trek leader Gert Alberts, who died here in 1876.

Proceed to the Pan Look-out. Continue via Springbokfontein, Kalkheuwel, Chudop, Koinagas and Klein Namutoni Waterholes, where there is always game coming and going. Proceed to Namutoni Rest Camp.

Game watching at the flood-lit Namutoni waterhole at own time.
Overnight: Namutoni
Meals: B, L & D

Proceed to Lake Otjikoto. It is a sinkhole lake, which was created by a collapsing karst cave. The diameter of the lake is 102 meters; its depth is undetermined and estimated to be in access of 142 meters. Tilapia guinasana, a mouth-breeding species of fish lives in Lake Otjikoto. The lake was a dumping ground for German Schutztruppe during World War I; in June 1915 German troops dumped war materials in the lake before surrendering to stop the South African and British troops from using them. Most of the larger pieces have been recovered and are displayed in Tsumeb Museum.

Depart to Tsumeb. Visit Tsumeb Museum. Except for the recovered German weapons it houses displays of local tribes and the Tsumed Mine, which produced the most number of minerals of any mine in the world and local history.

Continue to the Hoba Meteorite that lies on the farm “Hoba West”, not far from Grootfontein. It has been uncovered but, because of its large mass, has never been moved from where it fell. The main mass is estimated at more than 60 tons, making it the largest known meteorite (as a single piece) and the most massive naturally occurring piece of iron known at the Earth’s surface

The Hoba meteorite is thought to have fallen more recently than 80,000 years ago. It is inferred that the Earth’s atmosphere slowed the object to the point that it fell to the surface at terminal velocity, thereby remaining intact and causing little excavation. Assuming a drag coefficient of about 1.3, the meteor would have been slowed to a mere 320 meters per second (1,000 ft/sec) (contrast this with typical orbital speeds of several km/sec). The meteorite is unusual in that it is flat on both major surfaces, possibly causing it to have skipped across the top of the atmosphere in the way a flat stone skips on water.

Depart to Okahandja, home of the woodcarvers of Namibia where we stop to give guests the opportunity to view and purchase from a wide variety of African craft.
Overnight: Okahandja Country Hotel
Meals: B, L & D

DAY 11 Departure
Depart to Windhoek to be in time for departing flight.

Clients can overnight in Windhoek at own cost. Windhoek has a wide range of accommodation facilities to choose from.