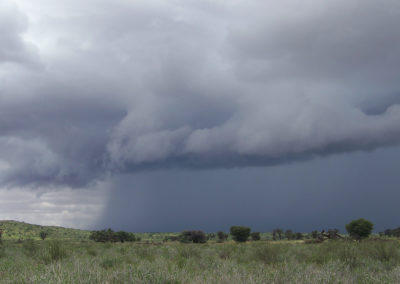 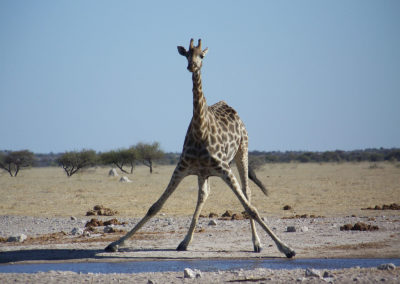 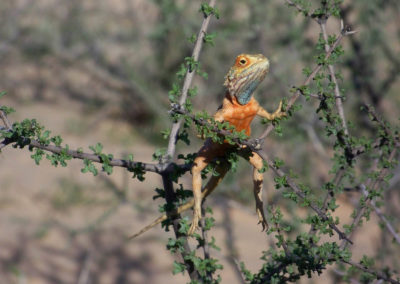 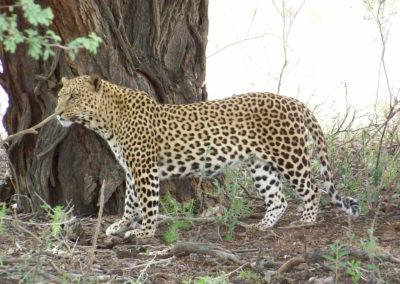 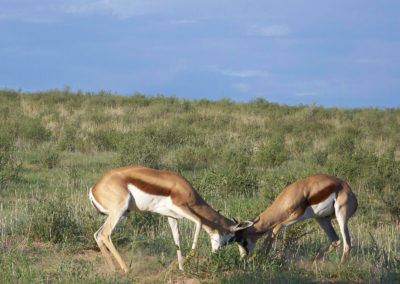 This tour covers the parks in the Southern & Central Kalahari and include very special wilderness areas where the wildlife are roaming free. This tour is not for persons who are looking for protected, enclosed campsites with good facilities. Although some campsites have good facilities, most campsites have basic or no facilities, where temporary facilities are provided by guide/crew. Most campsites are not fenced and animals may move through these camping areas. The necessary precaution is taken to ensure clients are safe when camping in these areas, as well as not to disturb animals. We are only guests in their territories and have to behave accordingly.
Optional upgrading to chalet/lodge accommodation is available on some nights at additional cost.

DAY 01 Upington – Kgalagadi Transfrontier Park (Botswana)
Time of departure will depend on clients’ travel schedule to Upington. Flight/bus schedule to be finalised. (Flight/bus not included)

Check in at Two Rivers on the Botswana side of Kgalagadi Transfrontier Park.

Game drive to Rooiputs Camp Ground on the Botswana side. Pitch camp. Depart on an afternoon game drive. The Rooiputs area is known for lion, cheetah, spotted & brown hyena and meerkat sightings.

Experience the park, camping in the wild with no protective fencing. Enjoy dinner around the fire, while listening to the sounds of the night. Don’t be surprised if you hear lion, hyena, leopard and black backed jackal during the night. Lions are regular visitors to Rooiputs at night.
Overnight: Camping at Rooiputs (Basic Facilities; A-frame, pit toilet & open air shower)
Meals: B, L & D

DAY 02 Kgalagadi Trans Frontier Park (Botswana)
Game drive along the Nossob River Valley via Nossob Camp to Polentswa Camp Ground on the Botswana side of the Park, 60 km north of Nossob Camp.

Afternoon game drive in the area. Visit Polentswa Waterhole, known for regular visits by predators and raptors. At noon Polentswa waterhole is one of the best places in the park to see raptors.

As with Rooiputs, Polentswa has no protective fencing too. This remote campsite overlooks the vegetated Polentswa Pan and is known for beautiful sunsets. Lions, hyenas and brown hyenas are regular visitors to Polentswa at night.
Overnight Camping at Polentswa (No Water. Basic Facilities; A-frame, pit toilet & open air shower)
Meals: B, L & D

DAY 03 Kgalagadi – Kaa Kalahari Concession
Game drive along the Nossob River Valley and 4×4 Excess Trail to Kaa Gate on the northern border of the Botswana part of the Park.

Enter the Kaa Kalahari Concession Area. The Kaa Kalahari Concession lies in the southwest of Botswana and borders on the north of the Kgalagadi Transfrontier Park and is one of the last great unfenced wilderness areas in Southern Africa covering 1,3 million ha. Roughly 800 people live in a few small villages. There are two major ethnic groups; the Bakgalagadi and Basarwa or San. The latter lives here for 3 000 years.

Vast herds of game can still be seen in typical Kalahari veld with rolling grass plains and Acacia woodland. The area is dotted with pans (dry lakes) which fill up with water after good rains in summer and attract large herds of eland, gemsbok, springbok, red hartebeest, some predators and many birds. Over 50 species of raptors have been recorded here. Kaa Concession is of ecological importance as it is the migratory corridor between the Kgalagadi Transfrontier Park and Central Kalahari Reserve.
Continue to the very remote Name Pan
Overnight: Name Pan camping (No facilities. No Water. Guide/crew pitch shower and toilet)
Meals: B, L & D

DAY 04 Kaa Concession – Ghanzi
Continue on 4×4 trails through the Kaa Concession and via the remote villages Zutshwa and Hukuntsi to Kang the Trans Kalahari Highway. Proceed to Ghanzi, where the feeling of a frontier town still lingers. Replenish supplies.
Overnight: Camping at Ghanzi (Chalets available at additional cost)
Meals: B, L & D

The Central Kalahari is a place where you find your soul, where the modern world recedes and you get in touch with the earth, the sky and the space. Animals to be seen are Gemsbok, Wildebeest, Springbok, Tsessebe and Steenbok.

Elephants have lately been crossing from the north into Central Kalahari during the rainy season due to high densities of elephant in the north.

The most common predators are Lion, Brown Hyena, Cheetah, Leopard and African Wild Cat. Many bird species can be seen, including bird of prey.

Enter at Tau Gate in the north-west. Continue on a long drive on the excess trail to Deception Valley.

DAY 06 Central Kalahari Game Reserve
Depart south on game drive along Deception Valley and Deception Pan to Letiahau Waterhole. This is the only waterhole in a huge area and predator sightings are common. Return game drive to camp

The park is home to elephants, white rhinos and hippos. Giraffe, impala and kudu are common along the river bank. Huge numbers of zebra migrate from the Makgadigadi Pans to the Boteti River during the dry season This is the second largest game migration on the African Continent. The dry Boteti River is known for lion and spotted hyena activities during the night.
Overnight: Camping at Khumaga Campground (Good facilities) (Chalets available at nearby Tiaan’s Camp additional cost)
Meals: B, L & D

Enter at Nxai Pan Gate and continue north on a very sandy road. Make a detour to Kudiakam Pan, home to an isolated group of Baobabs known as Baine’s Baobabs, named after the famous painter and explorer Thomas Baines, who painted these baobabs in 1862.

Continue to Nxai Pan Campground. Afternoon game drive. Visit the waterhole, which is the only waterhole in the dry season, in a huge area. The waterhole is known for spectacular sunset photography with elephant and other species silhouetted against the setting sun.
Overnight: Camping at Nxai Pan Campground (Good facilities)
Meals: B, L & D

DAY 10 Nxai Pan – Francistown
Backtrack on the sandy 4×4 road to the main road. Continue to Nata.

Visit Nata Sanctuary. The Nata Sanctuary at Sowa Pan, which is part of the Makgadikgadi Pans, is a community project and one of Botswana’s premier birding destinations. Nata Sanctuary is home to 165 bird species including flamingos and pelicans. After good rains, hundreds of thousands of globally threatened Lesser Flamingos, along with Greater Flamingos, Chestnut-banded Plovers, Great White and Pink-backed Pelicans, and a host of other waterbirds converge on the nutrient-rich waters of the pans.
After good summer rains with the right level of water on the pan, the Sanctuary hosts the largest congregation of Lesser Flamingos in Southern Africa.

Continue to Marekele National Park. The Marakele National Park in the heart of the Waterberg Mountains, the transitional zone between the dry western and moister eastern regions of South Africa. Contrasting majestic mountain landscapes, grass-clad hills and deep valleys characterize the park. Rare finds of yellowwood and cedar trees, five meter high cycads and tree ferns, are some of the plant species found here.

All the large game species from elephant and rhino to lion, leopard, cheetah, brown and spotted hyena, antelope species such as reedbuck, mountain reedbuck, eland and tsessebe as well as an amazing variety of birds including what’s probably the largest colony of endangered Cape vultures (more than 800 breeding pairs) in the world, have settled here. The western section of the park is one of the best places in South Africa to see white rhino.

Enter the park and continue to Camp Ground in the Western Section.

Do an afternoon game drive through the Western Section. The Camping area is frequently visited by rhinos at night
Overnight: Marekele (Safari Tent available at additional cost)
Meals: B, L & D

DAY 12 Marekele – Johannesburg
Depart on a morning scenic game drive up the Waterberg Mountain. If the wind direction is favorable, one gets excellent photo opportunities from the view point at the top of the mountain of Cape vultures gliding low overhead. Game drive to the gate.

Continue on a game drive to the exit gate. Depart to Johannesburg. Drop off at OR Tambo International Airport or at accommodation. (Accommodation not included)